Moving On - The Two Rein

Les helps riders who have taken their horses through the snaffle bit and hackamore progress to using the bosalito to train the horse's nose.

Fitting the bosalito, choosing an appropriate bit, getting started using the gear, basic neck reining, and how to how to hold the reins are key topics in this second of the three-part hands-on series

The two rein phase is the third step in the process of bridling a horse the traditional Californio way. The first two steps are the snaffle bit phase and the hackamore phase.

Using the traditional method, the bridling process (moving from the hackamore or bosal into the bridle) should take at least a year of consistent riding and it could take longer. There is no hurry because this is the last phase of the horse’s training and we want it to be done perfectly. A bridled horse is a work of art. 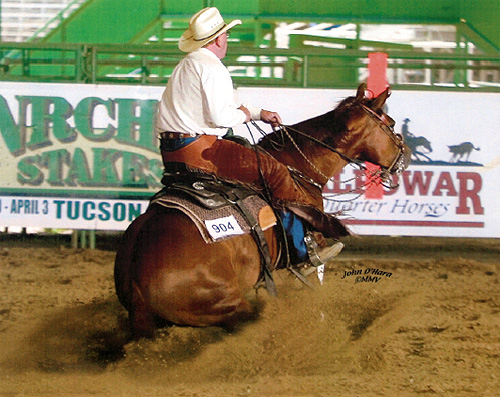 The two rein bosal is the transitional phase between the hackamore and having the horse straight up in the bridle.

We start every new phase with a clean slate so we want to remember our past flaws and recover that lost ground by doing a better job with each phase. We are now entering the last phase, the phase that creates a horse who is straight up in the bridle.

What is the Two Rein?

So, what is the two rein stage and why do we do it? The two rein stage is where we ride the horse with a bosalito. This is a 3/8 inch, pencil-size bosal. It fits the nose of the horse the same way a regular hackamore does but its small diameter allows it to fit under the bridle. The bridle fits over the top of the bosal and the rider has two sets of reins.

The bosalito should be shaped the same way we shaped our hackamore; you can find more info on the hackamore page of our website, so that it fits the nose properly.

Our next job is to decide what bit we will put over the top of our bosal. It is important to remember that we are choosing our bit for a horse that has a ‘fresh’ mouth. 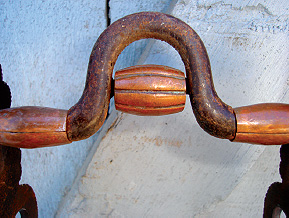 We choose the bit according to our horse’s conformation, his response to pressure or lack of same. I usually start a horse out in a medium mouth piece.

Mouth pieces come in three powers, 1, 2, and 3; with 1 being cold and 3 being hot. The number 2 mouth piece is a really good place to start, you can go up or down from there. 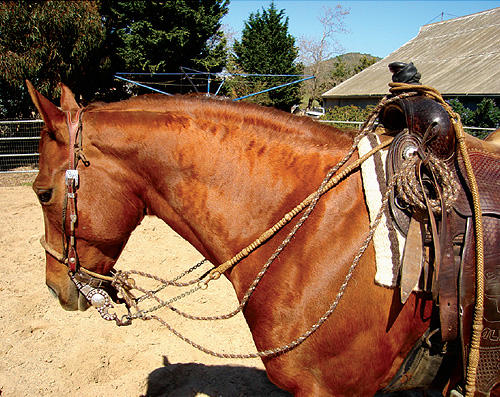 Checking the horse up in the bridle for the first time.

Leverage position 1 tends to lift the neck and shoulders for horses who are dumpy in the shoulders or maybe have a short neck. Leverage position 2 is for a horse that doesn’t really have conformational difficulties. Leverage position 3 works well on the horse whose neck is set on a little higher. The higher leverage ratio will encourage him to drop his whole neck from just in front of the saddle all the way through the poll.

On a green bridle horse I will usually choose a bit that has some port to it. I like to start out with a bit that’s a number 2 in mouth power and a number 2 in leverage. As I said before you can always move up or down if you feel the need.

Many people like to start out in a bit that’s a little too mild but that can be a trap. Starting the horse in a bit that is too soft or too mild will encourage a lack of respect from the horse. He will learn that he doesn’t have to pay attention to it. That is the opposite of what we are after. We want the bit to produce the ultimate respect from the horse and not make him afraid. This is very important.

A really good quality bit is critical. The bit translates our message to the horse in a language that he can understand. A good bit is weighted and balanced so that it has pre-signal and signal, pre-load and load.

I like to use braided rawhide romal reins with 8 to 10 links of chain from the bit to the rein. The chain adds pre-signal and balance to the rein. You do see longer chains but I think 8 to 10 links are plenty, anything more is too long. Because I start a green horse in a port bit I have my curb strap pretty loose. I want the horse to operate off the bit and not the curb strap. 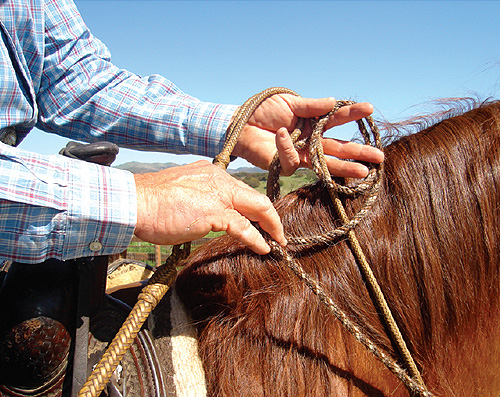 Holding the reins with a two rein bosal.

You probably won’t feel comfortable with quite that much bit but I would recommend a bit with an inch to an inch and a half port with a roller. You should adjust your curb strap so that if straight down is 1 and pulled all the way back is 10 it will only begin to intervene at 5.

As I said above this allows the horse to learn about the inner workings of the bit and understand it.

Getting Started with the Two Rein

Why? Because leaving it off one ear allows the bosal to hang slightly lower giving the horse more room to open his mouth for the bit. If I put the headstall of a correctly fitting bosal over both ears and then try to bridle my horse he is going to get an unpleasant surprise when he opens his mouth for the bit.

When taking off the two rein you reverse the process. First take both headstalls off over the left ear, and then take the bridle the rest of the way off followed by the bosal.

Once I have the bridle on I take a small syringe (no needle) and squirt about 5cc of liquid glycerin into the horse’s mouth. This is good lubrication and helps the bit to move smoothly. A moist, foamy mouth is much more comfortable for the horse than a dry one and I find that the glycerin really helps.

For his first day or two in the two rein I will start by taking my horse to the round pen. I run the bridle reins through the hole in the front of the saddle up to the horn so that there is VERY soft pressure on the mouth. I don’t chase him but I do move him around for a few minutes just to see how he reacts to the pressure.

This helps him to learn some of the pressure points of the bridle and to figure out some of the rules of the game on his own.

The essence of bridling the horse is that the horse respects the bit and stays off of it. The horse should feel as though he is trying to catch up to the bit. We should feel a cushion when we pull the bit straight back.

How do you hold the reins? Well, if you ask ten different people you will probably get ten different answers to this question. The bottom line is that there is no real right or wrong way to do it. You do always want to make sure that the bosal reins are on top.

I carry the reins in my left hand. I split the rawhide reins with four fingers and carry a coil of the little hair rope within the same four fingers. I also keep the left bosal rein slightly shorter than the rest.

The real definition of bridling a horse, as far as I’m concerned, is “Will he neck rein and stay in the bridle?”

Neck rein means that if I lay the rein softly across the horse’s neck at a standstill he doesn’t really go anywhere. He bends his head and neck away from the neck rein to the point that his nose comes around to the toe of my boot. His forehead should stay perpendicular to the ground throughout the flexion. He should do this equally well to both sides and be able to go from right to left and left to right very quickly.

As we start out in the two rein we have a horse that we wish neck reined. At this point, if we lay the rein against the side of his neck and tighten the rein the horse will end up looking to the outside.

The essence of bridling this way is somewhat forgotten and somewhat misunderstood. Our two rein horse has an educated nose from his hackamore phase and he has a green mouth. This mouth is a precious thing, if we make mistakes in this phase it’s over. In the prior two phases of snaffle bit and hackamore training we should have weeded out our mistakes so that by this phase we know what to do and what not to do with our horse.

Now is our chance to make him better than he’s ever been by taking more care, more time and more patience.

If we just lay our right bridle rein against the horse’s neck he has no real idea what we want so we have to educate him. That is why we have the bosal; it is kind of like training wheels on a bicycle.
Start in the walk and lay the right rein against the horse’s neck. Of course he really has no idea what we want by this so we take our left bosal rein and give him a soft pull, an educational pull to the left.

He understands this signal because of his hackamore training and flexes to the left. We match the pull on the left rein with left leg pressure from our boot top to encourage him to flex and bend. The bosal is there to show the horse the way. 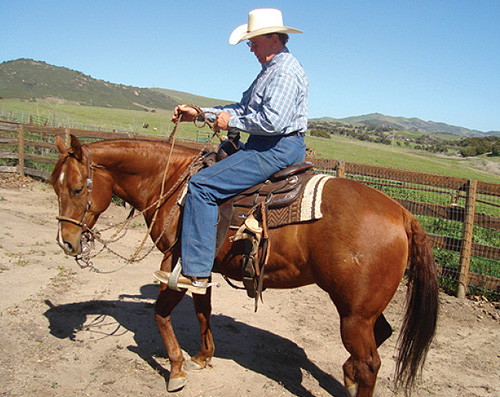 Above & Below: Educating the horse to neck rein right and left. We don’t want the horse to turn his whole body, we want him to flex his neck. 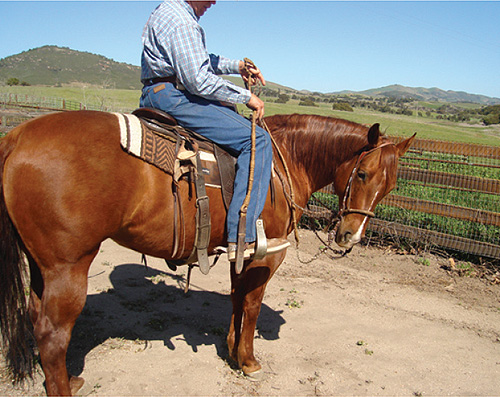 Asking him to bend his head around to the right we change the reins to the right hand, lay the left rein against his neck, pick up the bosal rein with the right hand and give a soft tug. Your right boot top encourages him to flex right.

For the horse to really understand this exercise you should do a lot of it every day. It isn’t something you want to let just anyone do because it requires a lot of feel. As with all our exercises the release of pressure is the reward.

You have to spend a lot of time on this simple exercise because it dictates your end result. I’ve never overdone a horse on this exercise and I’ve done a lot of it. This exercise is one we can and should repeat over and over again.

It is very important to remember that we are NOT teaching the horse to change directions by neck reining; we are only concerned with moving the horse’s head to the left or right.

When practicing this exercise you will want to get your horse to the point where he really bends about 90 degrees because when the horse is under pressure you’ll probably get about half that and that’s about the amount you want. If you only ask him for 45 degrees now more than likely he will be too straight under pressure of a maneuver. 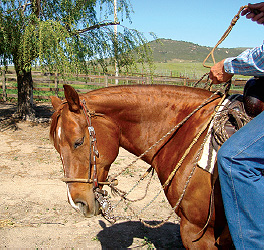 Left neck rein with all the reins in one hand - you do this by flexing your wrist.

The horse needs to be bent on his turns to the same degree he was when you were riding him in the snaffle bit in his maneuvers.

We teach the horse to drop his nose straight back in the same way. We first ask with the bridle rein and then re-enforce with the bosal straight back. We use both legs (boot tops) to encourage vertical flexion the same as in our snaffle bit and hackamore training phases.